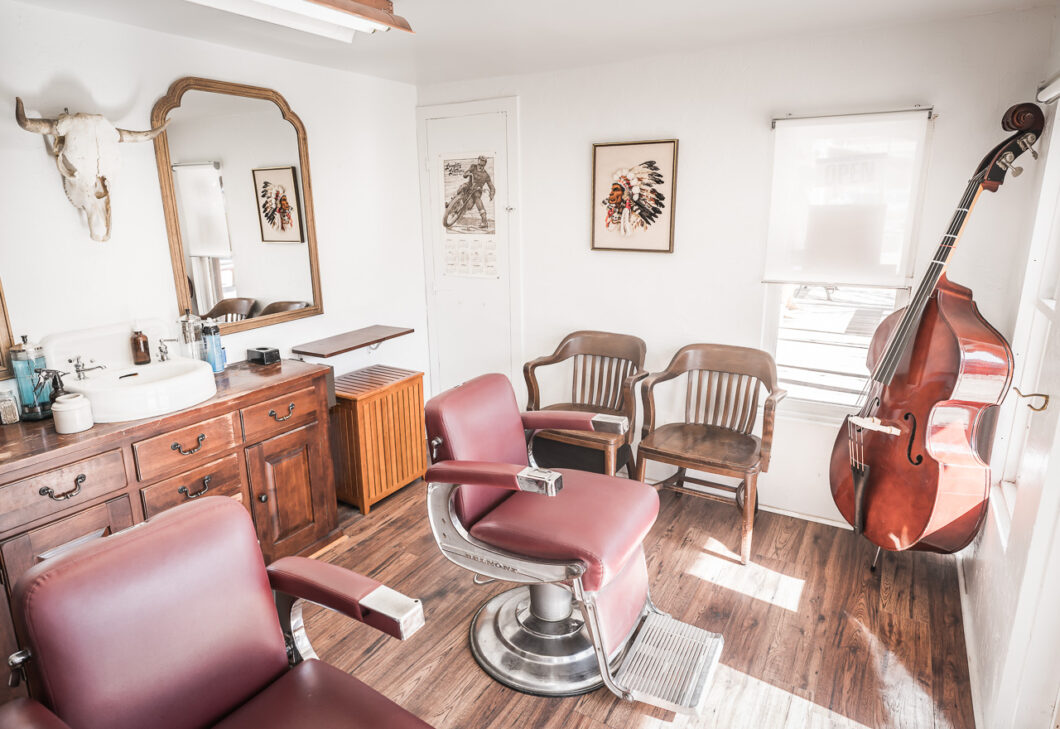 It’s exciting to hit the road and explore the many byways and highways crisscrossing the USA! However, nothing conjures up the romanticism of the open road more than Route 66.

One of the original US Highways, Route 66 connected Chicago to Los Angeles and all the small towns along the way like Williams, Arizona, at least until the advent of the interstate highway.

Williams was founded in 1876 by local ranchers, and connected by railroad only a few years later in 1882.  It was the railway that helped usher in Williams future as being the gateway to The Grand Canyon a mere 60-miles to the north.

Interstate 40 bypassed Williams in 1984.  Since then it has remained a lively small town focused on catering to the many tourists visiting The Grand Canyon or driving the remnants of Route 66.

The historic downtown boasts a selection of hotels, bars, diners, and a new barber in town.  Electric Barbering is now carrying on the tradition of being the communities only barbershop and the barber is making a name for himself around town.

New Barber In Town On Route 66

Electric Barbering found a home in the old courthouse building at Wild West Junction. A collection of touristy businesses and motel with an old wild western theme.

Calen Koenig, barber and owner, made Electric Barbering into a destination for a great haircut in an atmosphere people enjoy.  His barbershop is a place where you step inside, smell the pomade, soap, and aftershave and join in on the conversation.

Calen tells us the shop name came from a desire for a name that wasn’t solely associated to himself or a single person.  Electric had the right feel and energy he was seeking. Then “Barbering” was added as it paid homage to the old traditional roots of the trade.

Making A Difference In Somebody’s Day

Making a difference in somebody’s day is very important to Calen.

“People can come to the barbershop and it can change their day, “ Calen says, “I like that it is that kind of an experience. You can be having a bad day and come and get your hair cut and it can lift you up.”

“A lot of people view getting a haircut like brushing your teeth, you just have to do it.” -Calen Koenig

It’s a two-chair shop where Calen and his apprentice cut hair and offer shaves five days a week. Opened in 2019 to a welcoming rush of appreciative locals, Electric Barbering operates with Calen’s main principle in mind – to make sure people look forward to walking through his door.

“A lot of people view getting a haircut like brushing your teeth, you just have to do it. But I do want people to come in here and feel like they had a different experience for the whole day.”

“I had a guy in here yesterday say, ‘Feels like new tires,’ Calen shared, “You get something new and everything just feels better on your car, same thing with getting a haircut.”

Since the shop has opened, people have loved visiting a barber again in town.

To Portland and Back – Barber Returns to Roots

While Calen grew up in Williams, he never imagined becoming the local barber.  A couple years after high school he moved to Portland, Oregon looking for something new.  Working in heating and air conditioning, Calen soon started to feel the pull of a new career.

“I spent a lot of time crawling under houses and up on rooftops in the rain in Portland and I felt like I just wanted to do something else,” Calen explained.

Around that same time Calen heard people talk about interesting barbershops and he realized there was a resurgence.

“It was the first time I heard about younger people doing barbering. Before that I always thought of the older guy who’d been cutting hair since World War Two.”

Calen spent 10 years in Portland where he trained to be a barber and met his wife. Then after tiring of the rainy weather, and looking to return to his small-town roots, he came back to Williams.  Calen finds “it’s easy to live a simple life here and make a living but also be able to get away and travel.”

“I love that I really know where Williams begins and ends, unlike a lot of cities.” -Calen Koenig

“I knew they needed a barbershop, so it seemed like a good thing to do, move back and open up something for the community,” Calen explains.

Inside a bit of Calen’s Portland influence is sprinkled on display; coffee mugs with an Electric Barbering logo. Portland is well known for its coffee culture with more than 2,500 coffee shops. A far cry from Williams, which Calen tells us only has one coffee shop.

“I wanted to bring something of that culture to town and what’s better than a good cup of coffee and a good haircut?” Calen explains, “they just kind of go together.”

When Calen was growing up in Williams, he visited the well-known and loved barber Tony Torrez. Tony was the local barber in town for more than 30 years, operating the Professional Shop on Route 66.

Tony was known as an empathetic man full of understanding and guidance.  In 2018, Tony passed away at the age of 83.

“Everybody knew Tony and you’d go in there and there’d be 10 or 12 guys sitting and waiting and Tony knew everybody,” Calen says.

As a kid, Calen never pictured being the one to take over Tony’s place as the community barber. However, even back then he liked the atmosphere of a barbershop. Calen remembers the smell – Campbell’s shave soap – and how Tony made everyone feel good. Now, it’s come full circle and he’s the one behind the barber chair in Williams.

“I get the Mayor, the City Council, they all get their hair cut in here and so it does have that community feel just like Tony’s,” explains Calen, “where people come in here and they can all talk together.”

Calen says, “I’m thankful everyday I get to enjoy the space I’m in and have been able to create something other people enjoy too.”

But while Calen may be picking up where Tony left off here in Williams, this shop is uniquely Calen. He’s gone for a classic, understated feel, where the few pieces in here are meaningful and have a story behind them.

“I did want something a little more timeless. I didn’t want it to feel like I was trying to be old-timey.”

Inviting with a few quality pieces on display.  There’s definitely a musical influence with instruments in the shop including a guitar and a double bass in the corner.  Customers might even catch Calen playing a few chords between appointments.

“I grew up playing in a Rockabilly band and I actually played guitar, so I like having that around,” he says, pointing to the guitar hanging on the wall. “I’ve been practicing on the bass … a lot of times people come up and while I’m waiting for somebody to show up, I’ll be playing on this or playing the guitar.”

Calen also loves vintage trucks and motorcycles. The shop showcases pictures of a few favorites including a 1981 Goldwing his brother owns.

Electric Barbering is a two-chair shop with a pair of bold red barber chairs.  They are classic Belmont chairs from the late 1950s or early 1960s, complete with ashtrays in the arms.

Calen got them after finding an ad on Facebook.  He said it was quite the journey as negotiations with the seller took six weeks. Calen finally drove to pick them up in Venice Beach, California.

The man selling the chairs apologized for the hassle.  However, he apparently had wanted to make sure Calen really wanted the chairs because of their unique history.

“He said these belonged to Johnny Carson and they were in his building in West Hollywood. He said his company had acquired them,” explained Calen, “I don’t know how to verify that, but if it’s true, there’s been some interesting people in these chairs.”

Even the sink in Electric Barbering that sits in front of those chairs has its own story. Calen discovered it discarded in the crawl space under the shop when fixing the plumbing before opening.

“It’s cast iron, it’s stamped on the bottom 1929,” Calen taps the side of the sink, “In Arizona, by State law, you have to have a sink in your barbershop.  Kind of cool to get to use it again.”

Calen hopes his shop will continue to be a destination for the locals, but also the tourists who pass through. He tells us now that he’s back home, he can’t picture leaving Williams.

Calen says, “I love cutting hair. I don’t see myself not doing that.” He adds, “I love this town too. I picked it because I feel like it’s a place I can spend a long time in.”

When Calen walks to work, he will typically run into either a patron of the shop or someone he went to high school with.

Maybe someday a bigger shop like Tony’s old place, which is now a gift shop.  Calen thinks it would be fun to get that old spot and bring new memories to it.  For now, Calen is happy to have picked up where Tony left off in Williams, while also starting to leave his own mark on the town.

“I like that barbershops are community.  People come in and you get to have conversations that you really wouldn’t have with strangers or other people.” Calen adds, “You get to build this relationship with people in your community that you just couldn’t otherwise.”

Greetings from Jimmy the cat❣️ During our tim

“Do what you love. Life is short, so do what yo