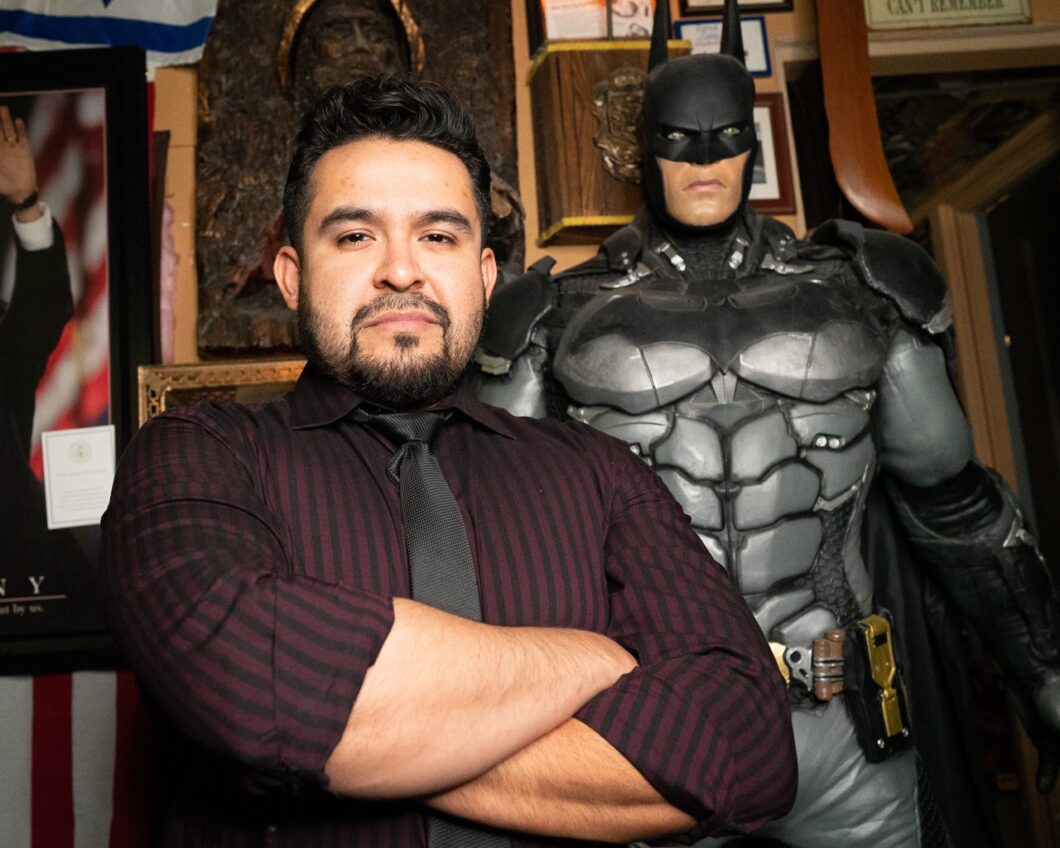 I first filmed with Matthew Gallegos at his barbershop back in 2014. Drawn by a single photo seen online of what looked like a throne of a barbers chair surrounded by a warm brown oak work station. Colorful aftershave bottles on the shelves lit up like Christmas lights.  I could see from this one image alone that this barbershop was something special.

As soon as I visited and stepped inside Matt’s barbershop, I knew this would be a great location to film for our YouTube Channel.  The shop is inviting, and it is a personal space that shows off the collector in Matt.

Matt captivated our audience with his shop full of hidden treasures and his humble, polite customer service. The first haircut video we filmed with him is still one of our most watched videos on YouTube now with almost five million views 🙌🏼

Originally called the “The Phoenix Haircut,” I quickly felt compelled to change the title of the video to “America’s Most Polite Barber” because of all the people commenting how polite Matt was.

I knew I would always come back in the future to visit Matt again.

Matt’s shop, originally known as House of Shave Barber Parlor and since renamed Matt’s Barber Parlor, can be found in downtown Phoenix. It’s in an older building constructed in the 1930’s.  It looks more like a house than a shop. That’s exactly what Matt wants – for his barbershop to feel like home.

“What I notice is when people first come into the place, they kind of look around,” Matt explains, “They feel a little bewildered. They feel like they just entered into someone’s private workplace or even a bedroom really.”

Then Matt is seen cutting hair as their eyes adjust from the bright summer sun outside.  “Once they see that I’m cutting hair and they see people seated and waiting, then they ease in,” Matt adds.

From that first moment I stepped through the door, Matt’s shop was a feast for the eyes. Walls filled with pictures, posters, signs and collectibles everywhere.

“It all started with just having one wall full of frames from top to bottom and then after a while the rest of the place just felt neglected and alone.” Matt explains, “So, I just went crazy and I made it a goal to fit a frame or picture or an object in every square inch in here. Barbershop museum and gallery!”

Returning six years later in 2020, there is still a lot of cool stuff to take in. A few items have been moved around in the shop, and Matt’s collection has grown.

“Everything is kind of mismatched here. I was aiming more for like a man cave – something dark and nothing makes sense and it doesn’t matter. A ‘Matt-Cave,’” he laughs, “People love it here. I’m honored and just touched by how much love and respect has been thrown my way.”

Looking around the shop, there are bookshelves brimming with books. Matt says he isn’t a big reader, but his customers are welcome to grab one. There’s a political corner with pictures of past presidents including Barack Obama, George W. Bush and Donald Trump. The Obama photo was one of the first pieces in this shop. Matt brought it here from a smaller shop he had in Texas.

The political corner is not too serious though, considering the Batman statue and poop emoji pillow nearby.  While it’s hard for Matt to narrow down his favorite items in the shop, he does have three standouts.

Matt’s Picks From His Collection

The jukebox is one with its bright, neon lights cutting through the darkness of the space. “I remember when I first started looking for jukeboxes online for sale, they were going for thousands.” Matts explains, “I was just barely starting the business up, it was very difficult and just by luck I found it on Craigslist for a great price, so I had to get it.”

Matt also brought an Ark of the Covenant replica back from a vacation to Jerusalem. The legendary artifact is an elaborate case built to hold the stone tablets the Ten Commandments were written on.

“I first looked at it and my wife knows how I am when I look at something. She’s like, ‘No, it doesn’t fit in our luggage’ and she thought that was the end of it. I said, ‘I’ll buy it its own damn piece of luggage’ and so I did. So there it is,” Matt says with a smile.

The last piece makes the space feel a bit like the Bat Cave – the life-size statue of Batman. “A record store was going out of business and it was a very high-priced item. At that time, I was trying to pay for a wedding … and it’s just not something you buy into when you’re already investing in a wedding.” However, Matt joked that he waited until he and his wife had a little misunderstanding and bought it as a way to cheer him self up!

When I first visited Matt, he told me how cutting hair is part of who he is. That passion is evident in his work and how he talks about his customers.

“I stepped into the domain in which I was destined for and that’s cutting hair and serving people. I believe barbering and haircutting and taking care of young gentlemen and old is my calling.” -Matt Gallegos

On the fly while talking with him back in 2014, Matt summed up his goal for every client who walks in the door.

“The most important thing for me here at my establishment is that each and every single person feels like a million bucks in exchange for $20.”

Now, seeing Matt again, his drive to make everyone who walks through the door happy gives the same result, but with inflation, his prices have gone up a bit.

Matt assured me that you still feel like a million bucks, but Matt adds, “It’s $40 now.”

Business Booms Thanks to Viral Video

Matt credits that first video we shot at his shop with bringing new people in. It’s not just the locals either who have found his shop thanks to the Haircut Harry feature on YouTube.

Matt enjoys reading the comments on his videos with the kind words touching his heart. He says it’s fun to watch people come to the shop and feel like they know it already. Matt explains people will search for a specific object they noticed in the video or say the shop is smaller than they thought.

“What an honor when someone walks in the door, though they’ve never been here before,” Matt explains, “They’ve been here before because they’ve seen the video a few times.”

Matt even has a special spot on the wall that shows how global his tiny shop has become. When people visit from other countries, they leave behind a bill in whatever currency they use. Tacked up on the wall, Matt shows me bills from places like Israel, Saudi Arabia, Australia and Zimbabwe.

As many of his customers turn into friends, they also like to bring trinkets for his shop from their travels. “Customers are so sweet, they bring gifts. They bring me toys, they bring me all kinds of pictures and frames and things I will cherish and keep because it’s a token of their appreciation,” he says.

From The House of Shave To Matt’s Barber Parlor

As word got around about Matt’s business, a name change was a natural fit. When I first found Matt, his shop was called The House of Shave Barber Parlor. Matt told me it was a title that fit the business when it opened because he wanted to focus on shaving. But then he got busier, and he was doing more and more haircuts.

“People would call in, by word of mouth or recommendation, and say, ‘Is this Matt’s?’ or ‘Who’s Matthew?’ or ‘Where’s Matt?’ because they know me by name. Customers started to call it ‘Matt’s,” explains Matt, “It’s easy and it’s catchy and so I went with it. I changed the title to Matt’s Barber Parlor.”

While the name has changed, Matt has no plans to change location. He likes the shop where it is.

While many businesses use social media to promote their shops, Matt is different. He believes in building the bonds with customers face-to-face.

“Honestly, it took a little bit too much of my time. I really want to put my focus on my work,” Matt explains, “When I come to work, there’s usually people waiting. I want to serve them and I give them a lot of energy.”

Matt explains he is a family man who wants to take care of his family and parents.  To do this Matt keeps the focus of his free time on them.  However, he is interested in sharing his skills online with the next generation so he started a YouTube channel called Matt’s Haircut Videos.

“I remember when I was a student and how eager I was to get better and to learn.  With the tutorials that we’re going to be doing,” Matt explains, “It’s educational based and I would like students to tune in and catch on some of the details I’m going to be displaying.”

Currently his growing collection of videos teaches up-and-coming barbers how to do things like beard trims, fades and a tapered haircut.

During both my visits here, it’s clear just how much Matt cares about everyone who sits in his chair. From his polite manner while cutting my hair, the neck and shoulder massage and even offering a selection of aftershaves to choose from, he puts the customer first.

A nice little hot steamed towel and a neck shave and a shoulder neck massage is very soothing to the everyday man.” -Matt Gallegos

“My main priority is that a customer feels welcome, comfortable and especially entertained. I go the extra mile as far as entertaining people. I like to offer little snacks, popcorn, a complimentary drink on the house while you wait.”

Matt wants people to feel at home at his shop as well as an active participant in their haircut.

“I like to face the customer towards the mirror at times and literally work with them and they work with me throughout the process of the haircut. That’s helped me create not only a friendship, but a very strong clientele.”

“I’ve been successful simply because I put my love and my heart into what I do.” -Matt Gallegos

Matt’s Barber Parlor has been open for nine years.  I expect the shop to be here for many more years to come.

“I’ve been successful simply because I put my love and my heart into what I do. I’m a barber. I cut hair. I serve people and I’m proud to be a servant.”

As I leave after my haircut, Matt says to me, “It was a pleasure to serve you today, Harry.”

It was a pleasure to be back in Matt’s shop and I’m already looking forward to my next visit!

👀 “Is that beautiful background for real?! No

We were so happy to return to the amazing Azores t

“I want my customers to feel like family or a cl

“We are harkening back to a Golden time when nei