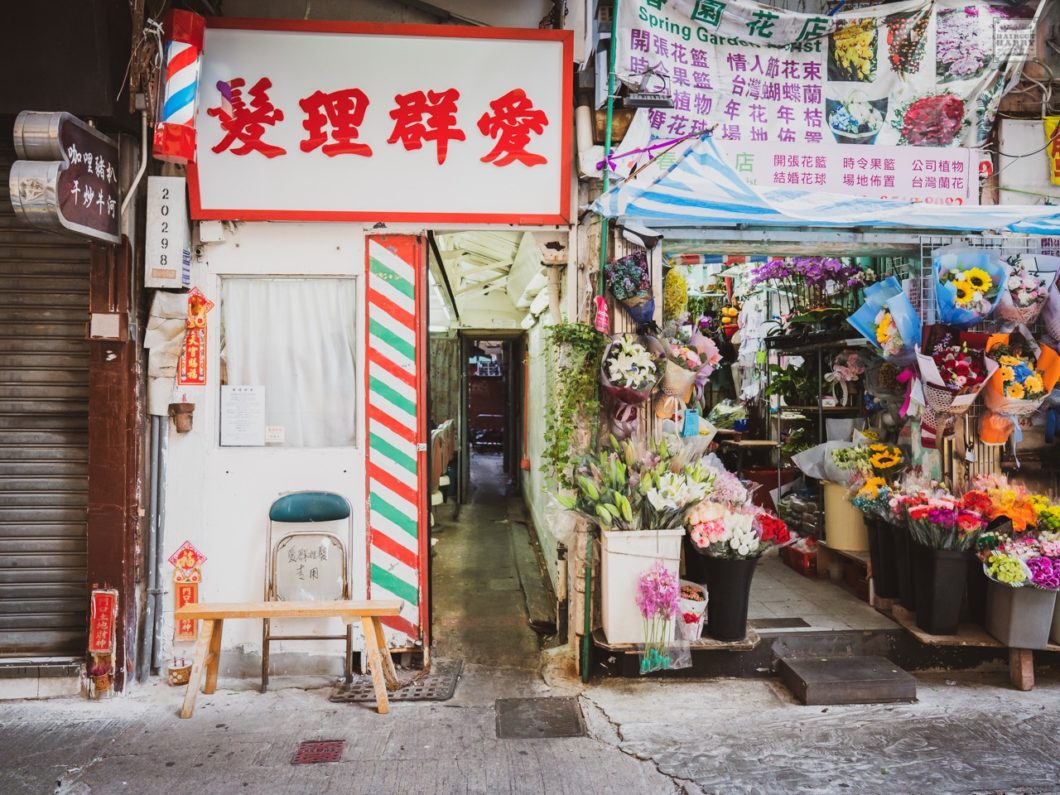 Our final destination in Asia for 2019 was Hong Kong.

While doing research prior to traveling, we came across an article about a photographer who was documenting old school barbershops in Hong Kong.  As you know so many of these old community shops are rapidly disappearing around the world.  One of the barbershops in the article called Oi Kwan caught our attention.

After arriving in Hong Kong, we found Oi Kwan Barbers located on Spring Garden Lane huddled between a flower shop and a busy local restaurant.  On the day I stopped by, a solitary woman was seated on a barber chair reading a local magazine.  It was Sze Yuen Yee who only speaks Cantonese.  I learned this when she showed me a small handwritten sign attached to the mirror.  It read, “We only speak Cantonese.”

After giving her a business card and motioning filming at the shop, she called her son, Mark Lau, so I could talk with him on the phone.

Mark runs the barbershop with his mom, and after a brief conversation we made arrangements to meet.

For 58 years Oi Kwan Barbers has been serving this local community around Spring Garden Lane.  I was looking forward to learning more about the shop and possibly filming a YouTube video too.

In the 1950s Mark’s dad, known in the community as Master Lau, came to Hong Kong from China’s Guangdong Province.  Back then Hong Kong was quite different, and Spring Garden Lane was bustling with locals.

Master Lau set up his stool on the street like many other barbers.  In those days, it was not uncommon for Hong Kong barbers to be opening up shop on the side of streets, in parks, and in alleyways.  The hours were long with some days not earning a single cent.

It was while working on the street side that Master Lau one day noticed a rent sign on a vacant alleyway barbershop.  That small shop became Oi Kwan Barbers in 1962.

Sze Yuen Yee, Mark’s mom, remembers the shop in the early years when Master Lau used to sleep in a bunk bed at the back of the shop until their marriage.  The shop is almost as it was all those years ago.

Over the years, the couple would raise their family and spend much of their days together in the shop.  Since Master Lau passed away, Mark’s mom continues to spend much of her time in the shop as she had.

Growing Up Around A Community Barbershop

Mark who is 30 years old has fond memories of his dad and his barbershop.  He remembers he and his brothers each had a different haircut while growing up.  Mark always had very short “swimmer’s hair” while his brother had the side part!

One of the things that stood out to Mark was that people looked down on barbering as an industry.  Master Lau once told Mark that being a barber in Hong Kong has no future.  Study and pursue another career Mark was told.

Despite the advice, Mark still has many fond memories growing up in and around the barbershop. On one occasion Mark was cutting a customers hair while his dad was eating lunch across the road in a café.  He remembers catching a glimpse of his dad beaming proudly as he watched his son working in the shop.

Prior to becoming a barber, Mark studied photography and filmmaking.  He worked as a TV producer and then later worked for an advertising company.  Since Mark has had work experience in another profession, he feels it gives him a different perspective.

When Mark decided to become a traditional barber, he recalls his colleagues thought he was crazy!

In 2014, Mark’s dad passed away.  Mark felt he had a responsibility to continue his family’s barbering tradition.  This culture was from his father’s generation and if he didn’t continue, he says it would be as if his dad’s culture was erased.

Mark has continued to serve his dad’s longtime customers and has attracted a younger crowd as well. “Barbering is like making art,” according to Mark.  Much like sculpting and molding, Mark explains, what you do “becomes an artwork.”

Now Mark feels people are beginning to appreciate the precise skills of a barber, and they think it’s an experience to have a haircut here.

Guangdong style barbering was distinctive as the barbershops were not as glitzy, but the barbers focus was to work one on one with a customer to deliver the desired hairstyle request from start to finish.

Back in the 1960’s, the Wan Chai area which included Oi Kwan Barbers was quite the hotbed of ill repute.  Fast forward to today, and the local community is under the threat of urban redevelopment.

Since 2016, Oi Kwan Barbers has been facing eviction due to their alleyway barbershop being deemed an illegal structure.  The Hong Kong government has been pushing an urban redevelopment agenda in cooperation with property developers.

One such upscale project, Lee Tung Avenue, was completed across the road from Oi Kwan.  The project is typical Hong Kong redevelopment, a mixture of upscale apartments, high-end pedestrian shopping, and cafes to help meet the needs of modern urban city dwellers.

Sadly it is the very backbone of communities, such as Oi Kwan Barbers, that become the victims of such major investments to gentrify.  With new developments come higher rents making it harder for the smaller original businesses to remain operational.

In 2017, Mark opened a second new shop on Mallory Street located in a restored historic Chinese house shop building.  The shop was a tribute to his late father and Guangdong barbering culture.  Considered a middle class barbershop, the space was a respite from Hong Kong’s urban jungle where a customer indulges in a personalized shave or haircut service.

It’s very important to share this culture with the people of Hong Kong. -Mark Lau

Mark’s intention was always to preserve a part of Hong Kong’s community barbering history.  Sadly, a combination of the pro-democracy demonstrations in 2019 and the 2020 pandemic has had a major impact on small businesses around the world.

Mark let us know that he recently had to permanently close the second shop on Mallory Street.

However, the Spring Garden Lane shop is still going, and offers an opportunity for you to feel the original Hong Kong style of barbering.

“It is a good experience for travelers,” Marks adds, and we could not agree more.

👀 “Is that beautiful background for real?! No

We were so happy to return to the amazing Azores t

“I want my customers to feel like family or a cl

“We are harkening back to a Golden time when nei