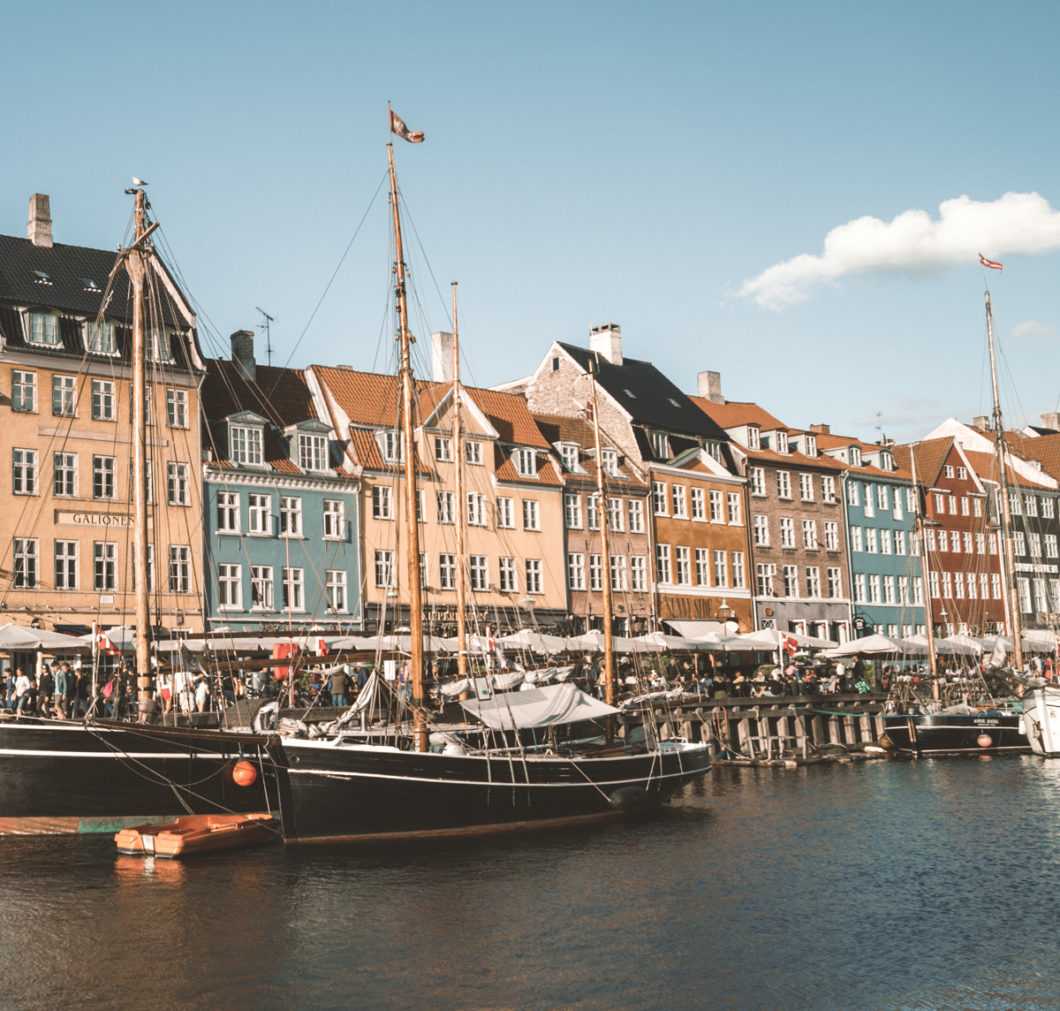 Copenhagen, Denmark was our last stop on this trip.  Also, it was our final destination for filming a video at a retro barbershop and arcade called Ruben og Bobby.  In order to see some of the sights, a walking tour of Copenhagen was a great way to explore the city.

As we were only going to be in Copenhagen a few days we decided to also stay in the Nørrebro neighborhood close to Ruben og Bobby’s shop.  In recent years this area has become increasingly popular with students, creatives, and tourists alike.  It is considered the multicultural hip neighborhood that offers hole in the wall eateries to high-end restaurants.  Cafes and coffeehouses provide ample options to rest your feet and discover this neighborhood.

Also, the area close to Queen Louise Bridge is a good central location within Nørrebro.  It is closer to the tourist attractions in downtown Copenhagen and has a few options for hotel accommodation.  This was our first time traveling to Copenhagen so we did not know what to expect.  Of course we ended up falling in love with this cool, laid back, and friendly city.

Since we had already prearranged a date to film with Bobby, we had a couple days around our filming schedule to explore Copenhagen.  So we decided to spend our time doing a walking tour of Copenhagen to take in some of the sights.  We were staying across the road from Assistens Cemetery where Hans Christian Andersen and Søren Kierkegaard are buried.  This was a great starting point and approximately an hour walk to The Little Mermaid.

First stop was coffee and pastries to go from local shop The Coffee Collective.  We sipped our coffee and walked into the park like Assistens Cemetery.  Established in 1760, this is where you will find the final resting place of Hans Christian Andersen which seems to draw a significant tourist crowd.  The graveyard itself is criss-crossed with paths, benches, and shady trees making it a pleasant stop to enjoy your coffee or perhaps read a book.

After drinking our coffee we strolled down towards Queen Louise Bridge.  Since we were visiting in August it was great weather for exploring the city by foot or bike.  Bike lanes are everywhere.  There are approximately 350km within the city, and local drivers are extremely courteous making Copenhagen a very safe capital for cycling!

Bycyklen is the official bike share program and costs as little over $2.00 per 30-mins on their Pay As You Go .  Apparently, one-third of the city commutes to work by bike so you won’t be alone!

Crossing The Lakes we walked towards The King’s Garden.  First opened to the public in 1770, The King’s Garden is the oldest and most visited in central Copenhagen.  On a warm summer day it is great for a picnic or to hang out with friends.  It’s a popular spot for locals especially during the warmer months.

From within the park Rosenborg Castle can be accessed across a footbridge.  Built in 1606 as a summer residence, this renaissance castle was used as a residence until about 1710.  The castle, or palace, is now a museum that houses a grand collection of art, crown jewels, and historically interesting artifacts like Christian IV’s royal toilet!

A good spot to photograph that wide shot of the castle emerging from the garden flora is from the formal Rose Garden adjacent Rosenborg Castle.  You will also find a statue of Queen Caroline looking across from one end of the garden.

We stopped to smell the blooms in the Rose Garden before walking to The Little Mermaid via Nyboder. These traditional old row houses were former naval housing from the 1700’s.  The houses are this yellow hue referred to as “Nyboder yellow.”  If you have time, then check out number 24.  Apparently it was one of the very first to be built and now holds the memorial rooms that are open to the public with limited hours.

Growing up, even I would have recognized this statue and its association to Copenhagen.  Sadly today, as interesting as it may be, perhaps a little over tourism detracts from the artistic beauty of the sculpture.  I struggled to take a photo without the heads of tourists scrambling to get a glimpse and without the tour boats pulling up almost into the rock she sits on.

This bronze statue by Edvard Eriksen was based on the The Little Mermaid fairy tale by Hans Christen Andersen and has been a tourist attraction since 1913.  Since then, she has sadly also been vandalized. Throughout history, she has been covered in paint, decapitated, amputated and even knocked off her rock with explosives.

Leaving the tourist crowds behind, we followed the waterfront back towards the downtown passing Gefion Fountain.  This photo friendly Norse Goddess was more relaxing to be around without all the tourists crowding around to get a closer look.  Sculpted by Danish artist Anders Bundgaard it took around ten years to complete.

The fountain depicts the Norse Goddess Gefion ploughing the Danish island of Zealand that Copenhagen sits on.  Behind the fountain is the Anglican St. Alban’s Church that makes for a dramatic backdrop in photos. 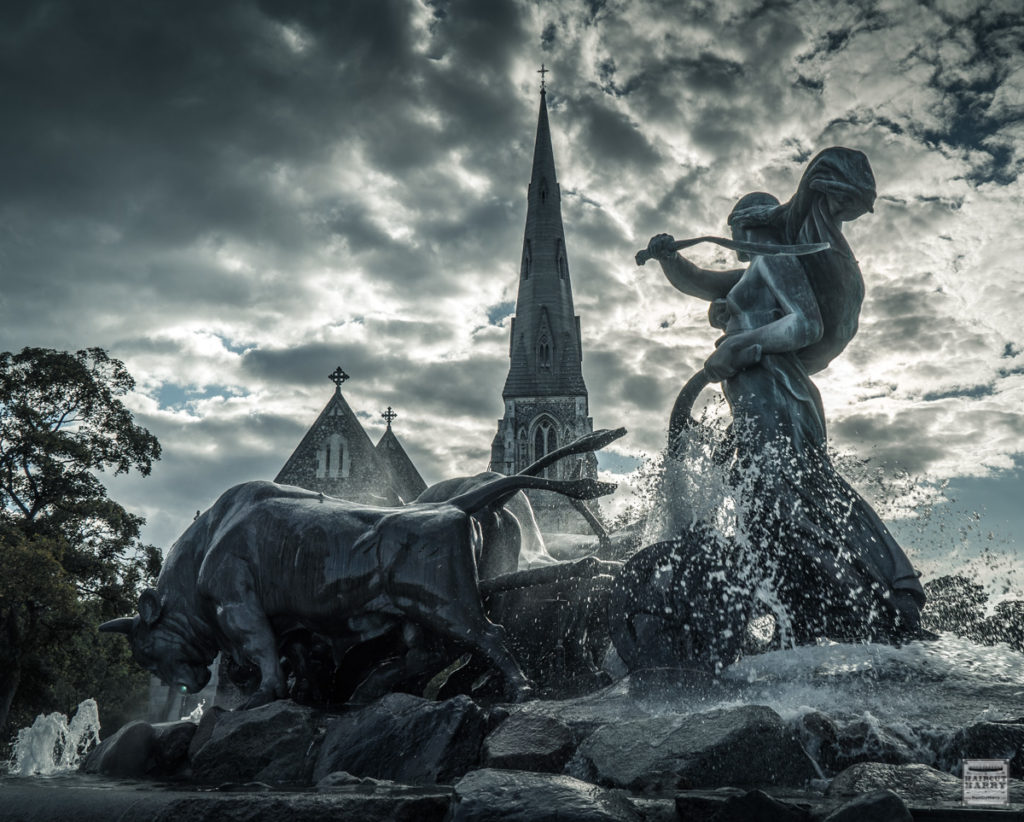 A little further down the road is the Danish royal family’s official residence. Amalienborg Palace is set on an impressive octagonal square centered with a huge statue of King Frederick V.  At noon daily you can experience the changing of the guards in the square.  However if you happen not to be around at that time, the area still makes for some impressive photos.  As the evening is setting in, the view up towards Frederik’s Church are worth taking in.  Also known as Marble Church, a slight detour to take a look inside if you have time will be rewarded.  Open daily until 5:00 pm.

For a good education on the past 150 years of Danish Royal history, the Palace museum is also open daily.  Entry is 105 DKK.

We ended our day as the evening was setting in the old harbor waterfront district called Nyhavn or New Harbor.  Taking in the evening we walked all sides of the harbor.  This tourist spot is famous for its colorful 17thand 18thcentury townhouses and restaurants lining the canal.  Number 20 is where Hans Christian Andersen lived when he wrote three of his fairytales.  Additionally, he lived at number 67 and number 18 for many years.

These days Nyhavn is that classic Instagram post of beautifully restored houses lined with restaurants catering to locals and tourists alike.  So it appears the bridge is a popular spot for selfies.  However, if you wander up the left side of the harbor towards town we think you can find many good spots to take in the colorful buildings.