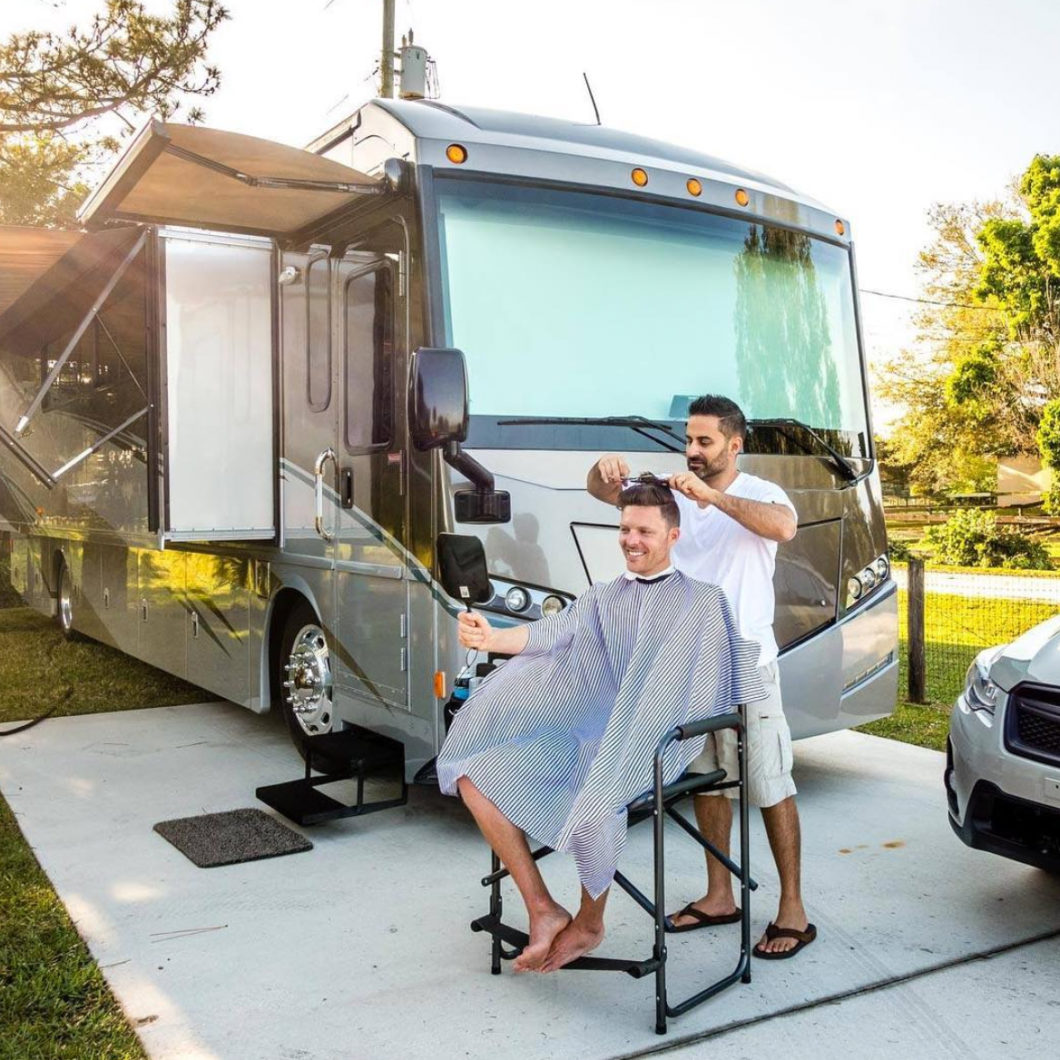 John Greco, The Wanderlust Barber, is a third generation Italian barber who was born and raised in Trenton, New Jersey.

The very first time he picked up a straight razor was from his grandfather and that made him interested in learning more.  John remembers he was 15 years old the first time he cut hair.  He used a pair of clippers he had and then he began cutting the hair of his friends.  However, it wasn’t until later on in his life that John came back to barbering.

Initially, he graduated from the Police Academy and worked as a Police Officer.  Thereafter, he worked as an account executive on Wall Street before taking a project management job at an Internet startup in Florida.  This is where he met his wife Jennifer, and they later began their own company manufacturing RC Helicopters.  After eight years, they sold their company.

“So it wasn’t until later on in life where I actually wanted to be happy with what I wanted to do for a living instead of just trying to work for money to pay bills. And I wanted to get out of the hamster wheel and the grind.” -John Greco

Finding What Brings You Joy

When John went back to his roots to find out what really made him happy, he found “it was serving people and cutting their hair.”  He says, “every single person that sits in my chair I’m able to make them look and feel better than when they first sat down and for me that’s a gift.  And it’s a blessing.”

Although he wishes he would have recognized this earlier in life, he feels he needed to go through everything he did in order to appreciate what he is good at and what brings him joy.

So John went to barber college and later opened The Pampered Gentleman, his first barbershop, in South Florida.

“The biggest mistake anybody can do is to chase a dream that’s predicated only on money.  You have to have your passion.  The passion and the love for something is the only thing that will keep you going when the money is not there.  The money is nice and it’s a nice reward but it’s not everything.” -John Greco

When John speaks about barbering he says, “Every single person that comes through that door has a different requirement, a need, personality, a different problem, and you see the human side of it.”

He continues, “You’re not just providing a service.  You are listening; you’re counseling; you’re giving them a shoulder to sometimes cry on; you are sharing in their joys.”  Someone needs a haircut because they are getting married; or they just had a baby and will be taking baby pictures; or they will be burying a loved one.

John states, “You see all aspects of humanity and it’s pure; it’s raw.  And that’s unmatched by anything I’ve ever done.”

Over six years ago, there was a turning point that led John and Jennifer to a simpler life.  The couple felt like they didn’t want to “be slaves” to their debt, lifestyle, and keeping up with the Joneses.  They agreed this wasn’t a sustainable nor healthy way of living.

John says, “the stress will kill you if you are not careful” and will cause health problems.

So they decided to sell their home, business, and belongings in order to pursue full time travel in an RV.  They scaled back and gave things away.  This was a process that took almost a year before they were on the road traveling.  In addition, it was important they started their journey with no debt.

“Get rid of things and lighten the load and get rid of everything to the point where you need almost nothing and then you will truly find happiness because you will not be burdened by materialistic things, by debt.” -John Greco

John and Jennifer hit the road with their youngest son Joseph who was ten at the time.  And they kept going for four years traveling throughout the United States as well as Canada.  Through all their travels, John states they barely scratched the surface.

The couple feels, “There is a whole world out there waiting to be explored.”

Adjusting To Life On The Road

The adjustment to being on the road wasn’t easy at the beginning.  John recalls how he hated it for the first six weeks.  And then one day he says, you get it.

“You wake up in the morning and you hear the birds chirping for the first time and you see flowers and you see people smiling.”  John continues, “It’s like I never really got a chance to actually stop and smell the roses.  It’s stupid but it’s so true.”  He expresses he was able to live in the moment.  Also, he would really appreciate simple things in life such as “a good pizza or a salad or a craft beer.”

In the past he felt, “you’re just so busy working and thinking about what you’re gonna do; your goals.”  For example, “I got to get my big house, my new car, gonna get the boat, going to take the cruise with the family.”

John adds, “It’s a hamster wheel and the hamster wheel spins so fast that you’d never get off. So you fall off and most people do.”

While they were living on the road, it cost them less than $1,000 per month.

They found happiness in the freedom of being on the road and experiencing life.

They traveled to the places they wanted to. John says, they weren’t always staying in the nicest places.  They sometimes parked in campgrounds, fairgrounds, and Wal-Marts.  However, they “stayed in the same towns, looked at the same sky, and looked at the same stars at night as the next person living in the big home.”

The couple feels the happiest they have ever been was “having no bills, no debt, living on the road, and being able to go anywhere and stay and eat any food that we wanted to first taste.”

After traveling full time for four years, the family made the decision to move to Steamboat Springs, Colorado so Joseph could attend a traditional high school.  Each member of the family wrote down their top three places of where to live, and they all had Steamboat Springs on their list.

In 2018, John opened Steamboat Barbershop.  Almost everything in his shop comes from the local area.  Furniture and items were either donated or purchased from local thrift stores.  Businesses in town made donations or gave stickers.  What is in the shop represents the town as well as John’s interests.  So things he picked up traveling are also in the shop.

John believes “everyday is a gift.”  He adds, “It’s a blessing to be able to serve my town and my community and be a part of this beautiful town we live in.”

By offering old school traditional barbershop services John feels like he is honoring his family’s tradition.

Greetings from Jimmy the cat❣️ During our tim

“Do what you love. Life is short, so do what yo