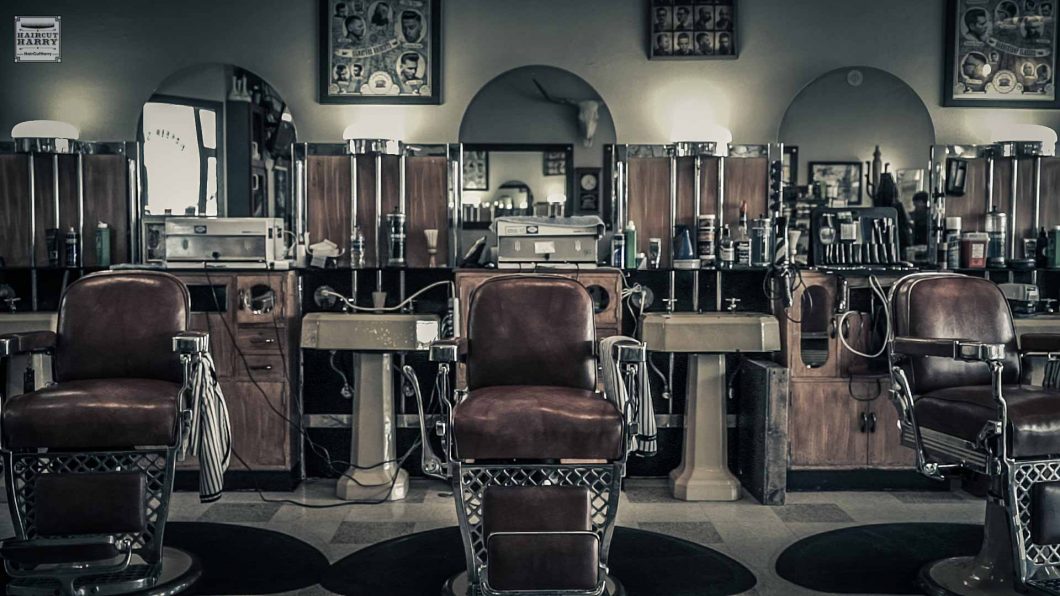 The Center Barbershop located in Santa Fe, New Mexico is the oldest and only traditional barbershop in town.  In a time where barbershops such as this are disappearing, we had the pleasure of meeting the wonderful Vigil family.  They have owned and operated this shop for three generations.

Currently Jude Vigil and his sister Velma Herrera own the barbershop, and their dad Gilbert Vigil continued to work a couple days a week cutting the hair of his loyal customers up until he passed away in March 2021.

The Beginning of a Family Business

Ramon Vigil originally opened the shop on the Plaza in downtown Santa Fe in the 1940s.  Unfortunately a fire in 1953 forced that shop location to close.  The shop reopened in 1954 in its current location and was renamed The Center Barber and Beauty Shop.

Aurora Vigil joined her husband Ramon to establish and run the adjoining beauty shop.  Luckily, all the original chairs and fixtures were salvaged from the fire and have continued to be in use in this shop.

In 1975 Ramon passed the barbershop business to his son Gilbert Vigil.  Gilbert smiles as he recalled the $1.00 price of a haircut when he first began working cutting hair.  Gilbert had been working as a barber for over 55 years.

He says he loves the barbering because of the people.  Many relationships have been built over the decades.  “There is a trust bond relationship built with your clients in these community barbershops,” Gilbert adds.

“What is said in the barbershop stays in the barbershop,” is Gilbert’s golden rule.  However, over the decades of serving the community The Center Barbershop has become the backdrop of many shared fond stories.

Jude and Velma have warm memories of growing up with their grandfather and dad in the barbershop. Local music that played softly while men talked and laughed.  A daily newspaper read by customers separated into folded sections.  The hum of the blowdryer and the hot shave machines.

Jude remembers shining shoes in the shop.  Velma recalls she and her siblings getting taught about being respectful and polite towards the customers, “I would say hello to the customers, shake theirs hands, and make sure I didn’t interrupt my dad.”

Velma remembers her grandfather and dad were very strict with the children about being near the cash register.  Therefore, she always stayed away at a safe distance yet drawn by curiosity close enough to see the register handle go down releasing the drawer to reveal the money inside.

That old cash register was used for decades in the shop all the way up until Velma and Jude became the new owners of the shop.

When it comes to traditions, Velma says all the young men in the family would get their very first haircut from either her dad or her brother Frank.  “My dad and brothers both have large hands and would place them on the child’s head with a firm and loving grip to keep them from moving and squirming,” Velma adds.  A photo of the first haircut and a lock of hair are included in numerous baby books.

Jude now proudly continues the tradition of giving a child his first haircut.  Photos are taken of this milestone and hair is given in an envelope to take home.

Jude feels it is very cool that families trust this old shop as the best place to bring their children for this special milestone.  Many people who came to the barbershop as children “now they bring their children and grandchildren and tell us of their memories,” Velma told us.  Jude considers it an honor “to be and serve as this important role in this community.”

The Family Faces Closing the Barbershop

Frank Vigil worked as a barber alongside his dad until he passed away in 2014.  Frank was someone who loved the outdoors and enjoyed a good time with friends and family.

After serving in the National Guard, Frank began barbering in his mid 20’s.  He was known for being a very good barber with a humorous side. “He would jokingly hold the mirror behind his back and whip it out in a theatrical performance much like a matador,” added Jude.

Following Frank’s death, Gilbert decided that it was time to close the shop, but Jude and Velma came together to keep the family tradition going.  The family was grieving the loss of Frank, and Jude and Velma felt that losing the shop would have been too much to bear.

Velma expressed, “Closing a legacy, seeing my dad depressed, losing our brother, just made us work harder to keep it.”  For Jude and Velma, they were preserving the legacy of their grandfather, father and brother in a way that would make them all proud.

After 12 years of running his construction company, Jude made the career change to run the family business with his sister.  He trained to become a barber and says he absolutely fell in love with barbering.  Like his dad, he also really enjoys the aspect of working with people.  Jude says the more involved he got, the more he came to realize “what a rare treasure we have and how few people know about it.”

When it comes to changing careers Jude feels, “If you have a passion for something there is a good chance it’ll work.  If it’s all about making money chances are it won’t work and you’ll never be happy either way.”

Jude and Velma are dedicated “to keep the classic shop going.”  While maintaining the old school core business basics, the business had to adapt a little.

“The big thing was the social media,” says Jude, “the shop had no social media a year and a half ago.”  Up until 2016, the shop had relied on the Yellow Pages and word of mouth Gilbert explained.  It is the attention to detail and quality of service that had sustained the shop for two generations.  “That’s your survival really the local people,” adds Gilbert.

A recent interest in the old school barbershop experience has helped.  “A lot of people come in and say they never knew we were here,” Jude adds, “now I think that people are beginning to appreciate the barbershop and the mom-and-pop stores.”

“School teaches the basics but you must learn, learn something everyday.” -Gilbert Vigil

For both Jude and Velma, their training began as children being taught to respect the customer.  Jude says they “offer a superior service, no rush haircuts, [and a] more laid back sense of community.”

When asked how he feels now about passing the shop onto a third generation, Gilbert responds with a big smile, “It’s a blessing!”

As for the future Jude hopes, “it keeps going and one day our next generation will take an interest in it.”

“It has always been a dream of mine to own Dicky

Over the years many of you suggested to us to film

Repost from @run_stp “When I started barber sch

Hello - how are you doing? We are excited to shar