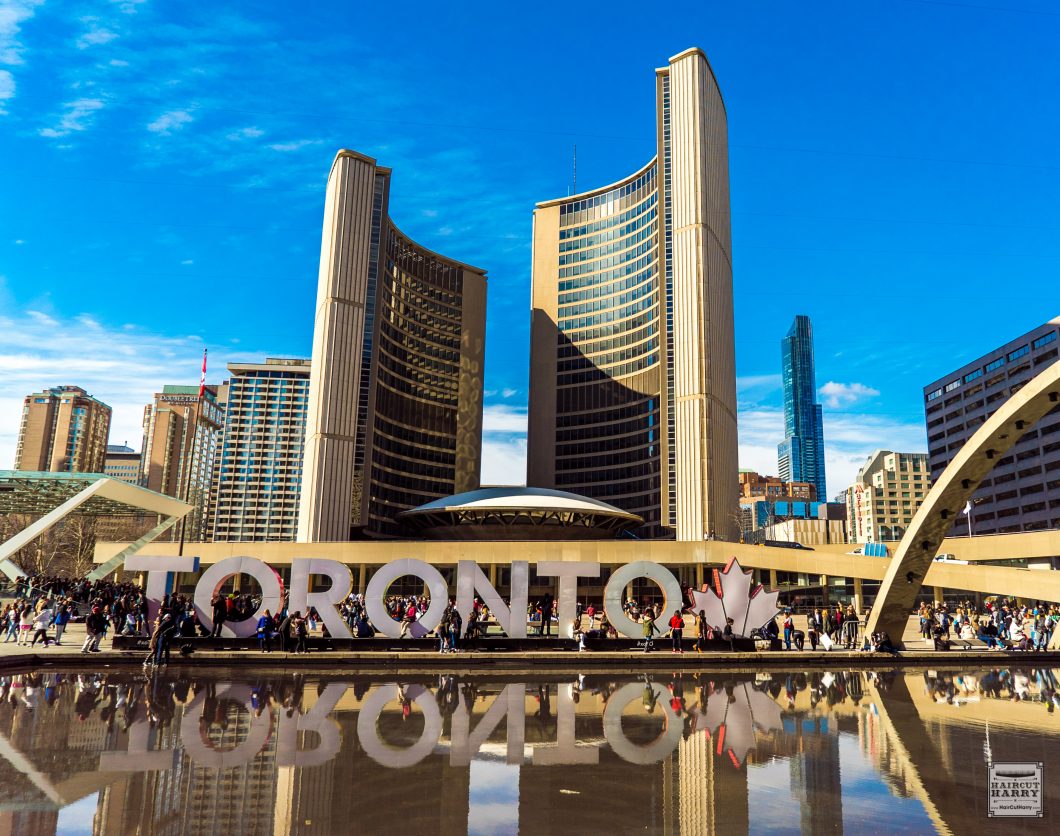 On our last trip to Europe we decided to try city hopping across the Atlantic instead of flying directly to our destination. Our first stopover was Toronto, Canada where we had arranged to film at The Nite Owl Barber Shop.

Our plan was to fly into Toronto and stay for a couple nights before traveling onward to Iceland. Typically we prefer staying within walking distance of the core downtown. This time we opted for a Hilton hotel close to the international airport where we were scheduled to fly in and out from. There are plenty of hotel options close to the airport that met our simple criteria of having a complimentary airport shuttle bus, Wi-Fi, and a breakfast with plenty of coffee.

Although I have traveled to Canada several times over the years, I had not travelled there recently. I learned the Canadian authorities had implemented a few entry requirement changes. You may want to read the next couple lines in case it impacts you. Flying into Canada you need a valid passport. US citizens will only need their valid passport but most other people will need an additional visa or Electronic Travel Authorization (eTA). Permanent US Residents are also required to have an eTA when flying into Canada. Overlooking these details will prevent you from boarding on your flight!

To determine if you need a Visa or an eTA to enter Canada you can go to this Government of Canada website.  If you are able to enter with an eTA you can quickly and simply apply online. The eTA cost is $7.00 CAD charged to your credit card. While most applicants get approval within minutes via email, it can sometimes take up to several days to get the approval. Don’t bother with third party services to process an eTA for you. These services are going to charge you for something you can easily do yourself via the links above to the official Canadian Government site.

We had a flight delay into Toronto but were on our way towards the exit after passing through Canadian Immigration. Transportation into downtown Toronto is really easy with the Union Pearson Express. Trains run every 15 minutes daily from 5:30 am until 1:00 am from the airport to Union Station in downtown Toronto. Tickets for Adults are $24.70 CAD return. A cheaper layover option for $12.25 CAD gives you a return ticket valid for up to 7 hours. There is also a family long layover option that covers up to two adults and three children.

After checking into our hotel there was time left in the day to take advantage of a layover ticket into downtown. This was perfect for us to walk around a bit and pick up a few travel supplies. Toronto is Canada’s largest city, and we found it to be great for walking and seeing all the different neighborhoods. We love how Toronto is a cosmopolitan city with a European feel.

First, we walked through the Financial District to Nathan Phillips Square for an obligatory photo of the Toronto sign. Then it was on to the Eaton Centre to utilize the free Wi-Fi, purchase Heattech items for Iceland, and pick up electronic supplies. The Eaton Centre has over 250 shops and is known for being the busiest shopping mall in North America. After getting a bite to eat we walked to Union Station to catch a train back to the hotel.

On our first full day in Toronto, we had the pleasure of filming at The Nite Owl Barber Shop on Lakeshore Boulevard West. This original 1940’s barbershop was lovingly restored by Brian Hurson. The shop had been vacant for several years before Brian started renovations on the original interior readying it to serve the local community once again. As soon as you step inside The Nite Owl you can feel Brian’s deep respect and appreciation of history.

I knew we would have limited time the next day before our night flight to Reykjavik. Therefore, I made a point of asking our Nite Owl friends what they suggest doing in Toronto in less than 24 hours. I was looking for local insight to this city that would take me to places beyond the typical tourist spots of the CN Tower and Nathan Phillips Square.

A trip to Toronto would not be complete without visiting The Nite Owl as Mike suggests. He says it is “the best shop in Toronto for barbering.” Your visit will be one you will always remember with Mike’s other suggestion, “One thing I recommend to do in Toronto that you can do in less than a day, in just a matter of hours, is get married like I did!”

It’s true Mike’s wife Lauren, who is also a barber and from Milwaukee, flew into Toronto at 9:00 am and they were married by 2:00 pm! According to Mike you simply visit the City Clerk’s office to complete the marriage forms and get a marriage license. Then call a wedding officiant who will meet you wherever you desire to tie the knot. If this grabs your interest, don’t plan it for a long weekend break when the Toronto City Clerk’s offices are closed at the weekends.

“Check out all the cool neighborhoods. It’s a really multicultural city,” Waylon told us. China Town, Kensington Market, Little Italy, and the High Park area were all suggested.  We had fun exploring the neighborhoods and found the whole area from China Town up into Kensington Market a great area. We spent time looking at the eclectic collection of shops and doing some street photography. This area is also home to a variety of independent cafes and coffee shops. We made stops to drink coffee and eat before exploring more of Toronto. 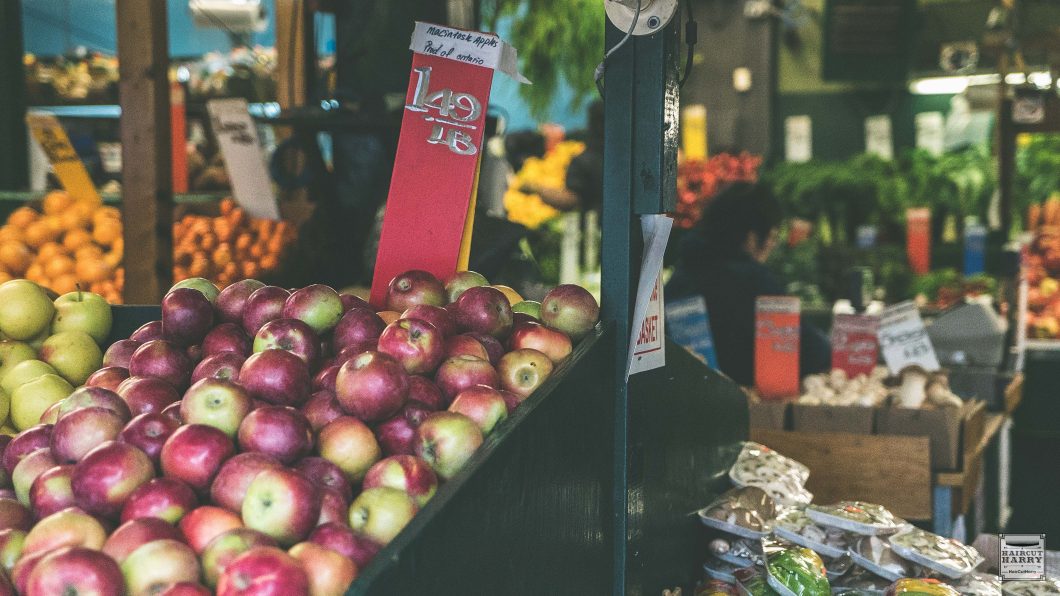 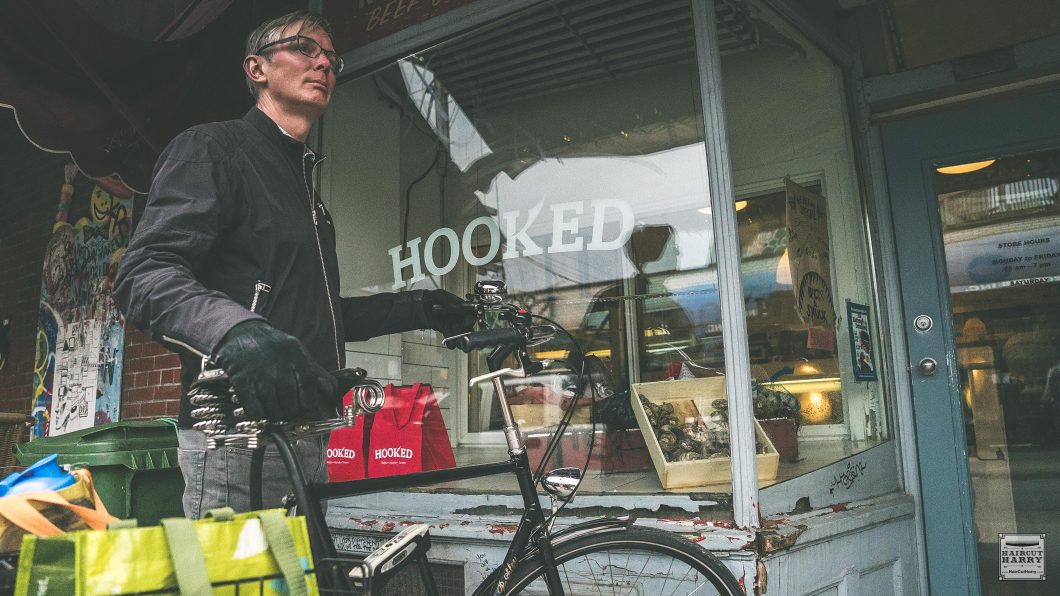 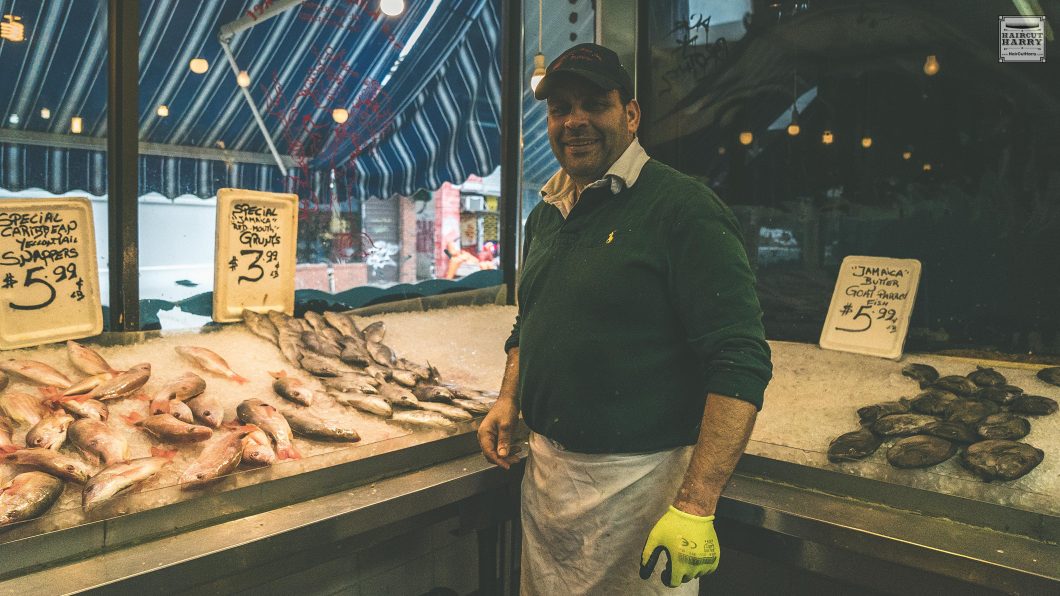 “Check out the lakefront. It’s really beautiful at this time of the year.” Vincent suggested, “Go all the way to High Park. When the sun sets it will be unbelievably beautiful.” Roman also suggested going to the parks as they are everywhere in Toronto.

After brunch in Kensington Market we strolled along a significant section of the waterfront. Although still being April it was a little chilly for me. I’ve obviously spent too many years in warmer climates! An alternative option to walking is to utilize Bike Share Toronto. Toronto’s bike share program is great for short stays in Toronto. A Day Pass (24-hour access) costs $7 CAD and a 3-Day Pass (72-hour access) is $15 CAD. The passes include unlimited 30-minute rides, and after 30 minutes there are extra trip duration usage fees. There are plenty of bike stations around the city so most point-to-point trips could be done under the 30 minutes. Bike Share Toronto has 270 bike stations around the city including some close to High Park and all along the lakefront.

High Park is Toronto’s largest municipal park of almost 400 acres. There are numerous hiking trails along woodlands and lakefront, diverse vegetation, and a zoo! We were slightly too early in the year for the Cherry Blossoms that typically bloom in late April to early May. However, we made the best of our limited time by wandering the trails before getting ready for the final suggestion from The Nite Owl Barber Shop’s proprietor, Brian.

“There’s a lot of original buildings and bars in the city that haven’t been touched. My favorite right now that I was just at a few times is Harry’s Charbroiled Dining Lounge.” Located in Parkdale, this is a classic original diner that stays open until 2 am on Fridays and Saturdays. Brian told us, “You can get a coffee and a milk shake, and it’s all original kinda like the Nite Owl.” The entrance is tucked away down an alleyway between an old No Frills grocery store and local pharmacy.

“You’re walking down there thinking ‘where am I,’ and you walk in there and some new people took it over and left everything completely original. It’s a cool spot; they still have Christmas decorations up and it’s now April. It’s just like a found treasure. That’s what I love about Toronto; you can walk around and come across these amazing spaces that have been untouched. The coffee is fresh no matter how late it is at nighttime.” -Brian

I have to agree with Brian’s appreciation for classic original spots. Seeing the neighborhoods and experiencing some of the historic local businesses made this trip special. Our perfect ending before heading back to the airport was being able to spend a little time treated like a true local at Harry’s – coffee mug in hand!

Before leaving the Azores in the fall of 2018, @ba

It’s hard to believe it has already been a year

Photo Repost from @sailingbarber⁠ ⁠ Thanks so

Behind the scenes filming last year with Ted @swee